Tim Hoffman is suffering from Empty Nest Syndrome. Yes, Tim misses his kids, but he is also a bit melancholy since he can’t be the in-house comedian now that his youngest child is off to college.

“I really miss the eye rolls and my kids saying, ‘Daaaaad, those jokes are so bad.’” Hoffman tells us here at Life of Dad. “Deep down I know my kids appreciate my sense of humor.”

So to fill that void Hoffman started telling dad jokes to anyone that would listen.

I’m reading a book about anti-gravity. It’s impossible to put down!

His wife, Rachel has had to watch her husband tell dad jokes to people wherever they go. She recalls this one time in the grocery store at the checkout line.

“We were in line waiting to check out and Tim saw someone with a bag of fries in their cart. He said to them, ‘Did you know the first French fries weren’t actually cooked in France? They were cooked in Greece.’ I wasn’t embarrassed since I know my husband, but I felt bad for the people who had to politely listen to his jokes.” Rachel said. 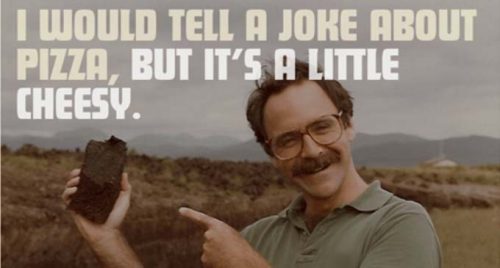 In Tim’s mind he was performing a community service. Trying to put a smile on someone’s face was what Tim loved doing. He knows that the jokes are corny, but that is what makes them dad jokes.

“As long as I can make someone laugh for even just a minute I feel like I made someone’s day.” Tim shared with us.

I just watched a documentary about beavers. It was the best dam show I ever saw!

Then one day Tim met his match. While in the line at the movie theater concession stand Tim made a joke and another dad overheard it and replied with one of his own. That rebuttal joke caught Tim a bit off-guard. Once Tim digested what just happened he wanted to trade a few more dad jokes with his new friend.

“I was so happy that we had an impromptu dad joke off for many reasons. One reason was that I will have a few new dad jokes when my kids come home for the holidays.” Tim rejoiced.

“My favorite one he told me goes like this, ‘Why did the Clydesdale give the pony a glass of water? Because he was a little horse!’ That is pure gold. I know my kids will love to hate that one.” Hoffman chuckled.

We loved hearing Tim’s story and hope he can have more dad joke offs with other dads he meets around town! What is your best dad joke? Let us know on our Twitter, Facebook or our Instagram page.

For more stories like this check out Dad Calls Guinness Book Of World Records After He Won 625 Consecutive Games Of Connect 4.