Welcome to the Life of Dad Collector of the Week! As a fellow geek and collector of all things Pop Culture I wanted to showcase some cool collections that dads share in the Life of Dad Geek Dads group on Facebook. It is a cool group of dads that talk about the latest movie, comic books, and video games that they are enjoying at the moment.

Some of the dads in the group would start a thread about something they collect which got me thinking. We should have a page on our site that is dedicated to dads showing off their collections. It can be comic books, bottle caps, records, helmets or whatever they are into! We want to see what your passion is and why you started up that collection. I believe that in each collection lies a better story. We want to share your story!

My Geek Show co-host, Patrick Quinn and I will talk about on our Facebook live stream called The Geek Show.

This week’s collection is from Sam from Dork Daddy

Here is what Sam had to say about his fantastic collection!

It would be cliché to begin this story with “it all started…” but even if I did, that’s an impossible target to nail down. I was there in ’77 when it really started. I got my first action figure in ’78 and more followed. I played with them heartily. I took them in the bath. I buried them in the backyard. I scuffed their paint and I lost their accessories. I loved them with all my heart and I kept every single one of the ones I collected between ’78 and ’85. I didn’t have them all – nowhere near. But I had enough for a boy to be proud of his collection. 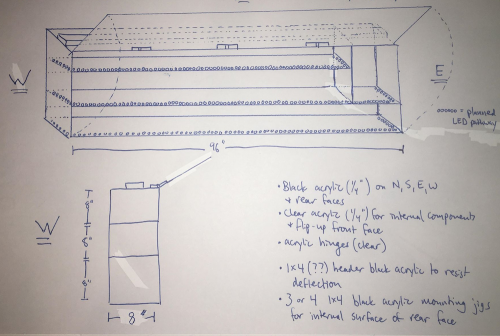 Through most of the 1990’s, when I was old enough to feel nostalgia for my youth, here and there I slowly picked up some of the figures I never got as a kid. I kept those too and brought them into the fold with their brethren. During those years as the internet matured so too did the Star Wars collecting community. Word began to spread of legendary collector Steve Sansweet and his epic collection of Star Wars memorabilia – rumors that were confirmed by one or two books that he published as well as his hiring by Lucasfilm itself where he headed up the Fan Relations department. I remember during those years seeing for the first time a production-quality image of all +/- 100 of the original line Kenner Star Wars action figures. I suppose that’s when the seed was planted.

I didn’t have anywhere near the full set. Nobody I knew did. But just imagine. Wouldn’t it be cool….?

Years went by. Decades actually. Suddenly I found myself in my 40’s – married, kids, mortgage, my own boss at my own office. You know… stable. And so, last October, a couple of friends and I were enjoying a dads-only weekend, part of which involved a guided tour of Steve Sansweet’s actual legendary Star Wars collection at Rancho Obi Wan in Petaluma California. If you have the inclination I heartily recommend you go. It really is something to behold. Steve is a gracious host and the collection itself is truly stupendous.

After the tour, as we shared our thoughts on the experience in the car on the way home, we realized that as impressed as we were, we were all left slightly disappointed by same thing. The centerpiece of any Star Wars memorabilia collection has to be the Kenner action figures, vehicles and playsets. Certainly they were all there to be seen in Sansweet’s collection, but we thought the way they were presented in the context of everything else was a bit of a let-down. To put it plainly, if I were in charge of curating that collection, I could have done a hell of a lot better job displaying the Kenner stuff.

That thought stuck with me and kept nagging me for a solid week after the tour. I thought about my own collection of childhood action figures and how they deserved better than the Sansweet collection offered its counterparts. (In Steve’s defense I attribute this feeling to the fact that he is a solid 25 years older than I am. I doubt a 30-something Steve Sansweet had the same emotional connection to those toys as people in my generation did.) And there it was. Those figures deserved better. I could do better. I HAD to do better – for me, for my buddies on the tour with me, FOR THE FIGURES! 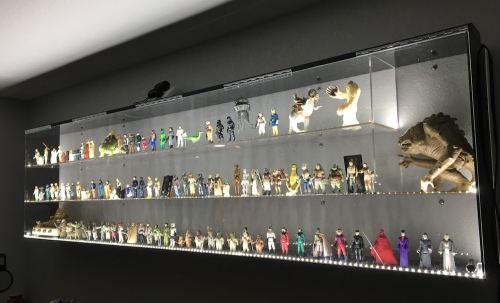 So I dove down the rabbit hole – and man let me tell you, that rabbit hole is deep. Right away there were decisions to be made. I settled early on the idea that I would complete the set of loose action figures, but how you define “the set” depends on how you define “action figure”. Do you include the Rancor, which is fully 7” taller than the 3 ¾ standard figures. That would certainly add a challenge to displaying them. Are the Dewback and Tauntaun action figures or vehicles? What about the Probot and trash compactor monster? They could only be found in larger playsets I had no intention of including in my display. What about the variants of what are essentially the same figures? big head Han, vs. small head Han. Blue Snaggletooth vs. red Snaggletooth. Vinyl-caped Jawa vs. cloth-caped. And that isn’t even considering all the accessories I was going to have to hunt down and replace. There’s an entire thriving industry of reproduction vintage Star Wars action figure accessories for cases just like these. Would I be ok buying and displaying a $1.99 reproduction of a hard to find blaster rifle knowing it was a fake, or did I need to spend $35+ for the real McCoy.

Ultimately these are questions that every collector needs to make for themselves.

I knew I was going to collect the “full set” as I defined it. It was also important to me to display my actual faded, worn, loved childhood action figures – rather than hunt down minty replacement figures. Once the parameters were clearly set it was time to jump in to the various online communities that focus on vintage Star Wars collecting. Between them and eBay, over the next few months, parcel by parcel the figures began arriving at my office. I let my staff in on the project early so they could have time to acclimate to the idea (and get over any objections if they had any). I had a wall at the office all picked out. A mock-up of what I had planned went a long way towards getting my co-workers on board.

As the figures arrived I shared my progress with a select group of friends who I knew would “get it”. I feel particularly bad for Art Eddy who got a no doubt jealousy-inducing photograph of whatever mail-call goodies were delivered on any given day. The value of a project like this really is in the sharing of it with other people. I’m grateful that I had a stalwart bunch of supporters cheering me on.

Figure by figure they trickled in and when it became clear that fulfilling the quest was eminent, it was time to start thinking in another direction. Most photos you come across of complete loose sets have the figures arranged in the order they were released in toy stores. I wanted to display them in order of cinematic appearance. That presented certain realities with respect to the dimensions of the display case itself. More decisions. Acrylic or glass? What about lighting? Do I make the case myself or have it made? As this was going in my office I wanted it to look professional. No home jobs here. This was it – the definitive action figure display. It had to be done right. I opted to let the pros build the case from my design. I hung the finished product on the wall and installed the LED adhesive tape lighting.

When it was finally hung and the LEDs were up and shining, my son and I spent the evening removing each of the collected figures from their individual zip-lock bags, mounting them on their stands and placing them in their final positions of honor in the display case. It felt like crossing the finish line after a 35 year marathon. When it was all done we called closest Star Wars buddy Ron. He and his son drover over to the office where Ron donated two of his own childhood figures to fill the final two missing positions in the collection. You can see the video of his reaction below.

And there it hangs today, in all its glory. It’s in a well trafficked place in the office where I spend a lot of time around it multiple times a day. I enjoy the hell out of it. My staff had to admit it’s cool. My patients are all impressed by it. It brings a lot of joy and a lot of conversation – arguably more than Sansweet’s similar display does. I like to think that this is the reward my action figures deserve after a lifetime spent in service to one little boy. If I was writing the next Toy Story chapter that’s the story I would tell.

There is an interesting, unanticipated post script one week after the project was gloriously completed. As I looked at my shining, beautiful collection over the week I was surprised by an unexpected twinge of melancholy. At first I couldn’t figure out where it came from. Then it occurred to me: I have literally spent my entire life assembling this collection. It was a dream. Now that dream is realized. The hunt is over. Nothing else will compare. Never again will I look wistfully at a vintage Star Wars action figure and think “Some day I’ll add you to the collection”. What do you do when your life’s work is done? At this point I honestly don’t know. But I plan to spend the next 25+ years at work basking in the glory of my complete vintage Star Wars action figure collection figuring it out.

Thanks for sharing Sam. This is collection is impressive….most impressive.  We love seeing this here at Life of Dad.

If you want your collection featured on our website here at Life of Dad and talked about on The Geek Show please email me art@lifeofdad.com. All you need to do is email me a few photos and a a paragraph or two about that collection.

Check out the Life of Dad Collector of the Week series here!