James Arnold Taylor Talks About Working On A Feature Film With His Daughter, Voice Acting And More.

James Arnold Taylor is this week’s guest on The Life of Dad Show.

I am always happy to bring James on The Life of Dad Show. James is a great friend to us here at Life of Dad. Not only has he been a returning guest on the show, but he has helped us set up other interviews with great dads.

In this interview James talks about working with his daughter, Lydia on the feature film Animal Crackers, voice acting and other aspects of fatherhood. You can hear the pride in Taylor’s voice as he talks about how well his daughter did in the film as a voice actor. Here at Life of Dad we love to see when a father is able to share his passion with his child. So when James opened up about that experience we were excited that he shared this wonderful story with us.

James Arnold Taylor is an actor, entertainer, motivational writer and speaker, host and emcee for every occasion. He is one of the most versatile Voice-Actors in Hollywood today known worldwide within the video game and animation communities, as well as an established event host for Disney, LucasFilm, REEDPop, SquareEnix and the USO.

Most have you have probably heard Taylor’s work and not even have known it was him. That to him means that he is doing his job right. Whether he is leading a clone army as Obi-Wan Kenobi in the Star Wars: Clone Wars animated series or running around Bedrock as Fred Flintstone Taylor brings our favorite characters to life. Not only does he voice animated characters, but he steps in for actors like Johnny Depp when a line needs to be redone for a film. 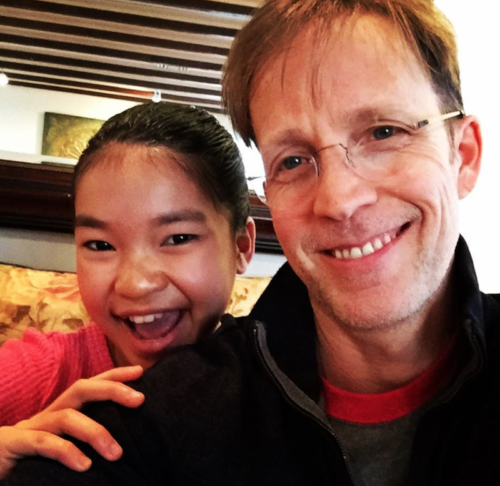 James Arnold Taylor and his daughter.

About The Life of Dad Show…