Mark Cuban – My Life of Dad

As a fan of the NBA I would love to watch games each week on TV. One game that will always stand out to me was when I first saw Mark Cuban on the sidelines of a Dallas Mavericks game. He was energetic and was a lot younger than the other NBA owners I knew of at that time. He would cheer on his team like any fan would. I loved it. It was great to see the owner of a sports team be that involved with his franchise.

Since his acquisition of the Dallas Mavericks in 2000, he has overseen the Mavs competing in the NBA Finals for the first time in franchise history in 2006 – and becoming NBA World Champions in 2011. They are currently listed as one of Forbes’ most valuable franchises in sports.

And to think I thought Mark was just the owner of the Mavericks. Once I started to learn more about Mark I found out I was completely off on my assumptions. In addition to the Mavs, Mark is chairman and CEO of AXS TV, one of ABC’s “Sharks” on the hit show Shark Tank, and an investor in an ever-growing portfolio of businesses. Mark is truly a master in many areas of tech and business.

From my interview with him you will see that he puts family first. He lives in Dallas with wife Tiffany, daughters Alexis and Alyssa, and son Jake. I really appreciate Mark taking the time out of his busy schedule to chat about fatherhood with me.

Art Eddy: You have three kids, two daughters and one son. You also have a very busy career with the many different companies that you run. How do you balance work and family?

Mark Cuban: I’m fortunate. I put business first before I got married. I managed to be successful beyond my wildest dreams, which let me put family first once I got married and had kids. So now I schedule around my kids as much as possible. I can’t make all their games, but I make most.

AE: What has fatherhood taught you about yourself and how did it change you into the man you are today?

MC: The most important words in my life used to be “you have a deal” or “yes” to a deal. Now my heart melts every time my kids tell me they love me or just call me dad. It’s crazy how much I just want to lock those moments in a time capsule and hold on to them forever. My priorities are dramatically different now.

MC: Terror.  Can I handle it? Would I hopefully be like my dad? What would my kids be like? Then I felt pride and love. It was terrifying and amazing. Just like it is for every new dad.

MC: Respect for others. Respect for yourself. Setting and achieving goals. Loving to learn. Loving your family. I want to treat them how I expect them to treat others and hope they grow into amazing adults

AE: I saw a picture of your kids on your Twitter account saying that they could be the future owners of the Dallas Mavericks. What do your kids think of what daddy does for work?

MC: They don’t care what my job is one way or another. They like going to Mavs games with their friends. But I’m just their dad.  The rest is all a distraction

AE: What is the biggest difference from the time when you were a kid to now as your kids are growing up? 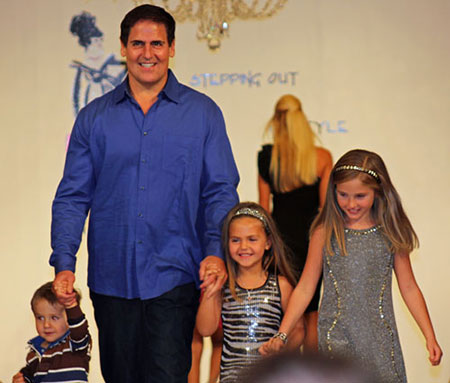 MC: On the surface it seems like a lot. Technology in particular, but at a deeper level it’s that they are much busier with activities.  We played in the backyard or in the park with neighbors. Now kids seem to have something scheduled for every night. It’s not that the activities are different. Sports. Dance. Classes. Whatever.  But there are a lot more of them and they are a lot more organized.

MC: Relax. It’s worked out for dads forever. It will work out for you.

MC: Not one movie. But we love having family movie nights

MC: Hanging in the pool on the Caymans.

AE: First few thoughts that ran into your mind when the Mavericks won the NBA Finals were….

AE: Sitting alongside Mark Cuban during a Mavericks game is like….