SCUF Gaming Controllers – Are they worth it?

(Note: I want to emphasize, this is not a paid piece. SCUF Gaming DID NOT reach out to me OR pay me to write this review. I contacted them, on behalf of this blog and for dads who read it. I thought it was something that might be beneficial to fellow gaming dads and wanted to share my experiences with you all.)

Ok Dads, if you’re tired of playing first-person shooters and getting your butts handed to you by a 14-year olds with better reaction speeds, have eyes that don’t dry out in 5 seconds and the fact their hopped up on 3 cans of Monster Energy (and don’t gain a pound), then listen up, I’m about to help you level the playing field. In the mean time, if you feel like taking a break, you may also play slots casino and win big cash prizes, learn here how.

If you haven’t heard of SCUF Gaming, allow me to explain. SCUF is the maker (leader) of custom gaming controllers. So much so, that they are the go to controller for professional gamers who play in leagues like MLG, ESL, GFinity, EGL, UMG, and ESWC. They also sponsor big events and are apart of the Call of Duty World Championships. Basically, these guys aren’t a bunch of kids in a garage somewhere with cans of spray paint and controller parts. They actually have 17 patents for the controller designs and features, which says something. They’re legit.

So what does “custom” mean? Glad you asked. With the new SCUF Infinity Controllers, you can make a one of a kind controller, based on your individual taste and preferences. Do you like longer joysticks? Domed or concaved? What about colors? Red, blue, green, yellow, gun metal, gold, silver, black, white, you name it, it’s there. Heck, they even have digital camo colors and zombie themed parts; visit https://scufgaming.com/xbox for guidance and options. You can also colorize the buttons, triggers and rings around your joysticks too. If you’re taking gaming seriously, you should consider a gaming PC as they are always so much better than the consoles. You can get ridiculous power if you buy a top pre-built gaming PC from these guys in the UK as they are easily the best builders that we have ever found. 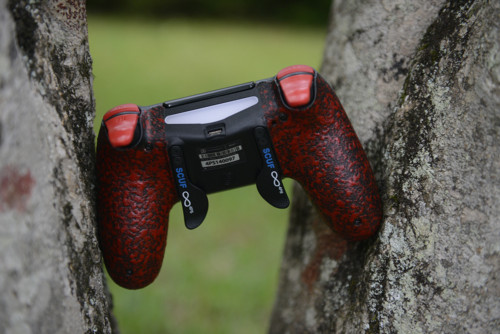 But other than color combinations and joystick lengths, what makes a SCUF so unique and a must have?

Being gaming dad who’s now 36, I realize that I’m not as “quick” as a those kids I mentioned earlier. Granted, I can hold my own and will refuse to accept it. However, if you older than me, chances are your finger’s reaction speeds have slowed, even just a tad, maybe you don’t have the wherewithal to keep up with the new generation of gamers. You need a hand, or better yet, a controller, to keep up. I reached out to SCUF about their products and told them I think there are a lot of dads that could benefit from all the features that a SCUF controller can offer. So the gave me the chance to customize a controller, to get the full experience, and when it arrived, I was blown away. As you can see in the images in this post, I choose to go with a metallic gun metal base and red accents. It’s my thing. But yours can be completely different.
And if you’re looking for virtual currencies to purchase items on your games, there are sites that provide you with a Great comparison of RunesCape gold selling websites.

Let’s start with the joysticks.

With the Infinity series, SCUF rebuilt the joystick housing on the front panel (not the actual mechanics, that’s still factory). By doing this, they were able to offer a quick change feature, think Nascar pit crews and how fast they change tires. With a simple tool that has two teeth, you slide it over the joystick, lock it in place and just twist. This unlocks the plastic ring (see the red ring in my photos around the stick), remove that, pull up on the joystick until it pops off and you can then change it out for a stick that is longer, that has a either a domed or a concaved top, it’s all personal preference. Why would you want a longer stick? Simple, the longer the stick the less movement you have to make, it’s more sensitive and because of the height, just a slight movement on the stick, means a larger movement on screen. While that’s the biggest advantage, there’s also the fact that joysticks take a lot of wear and tear and will eventually need to be replaced. With SCUF’s quick change feature, this problem no longer exists, you can just place an order for SCUF replacements and your off and running without having to pry open your controller or buy a new one.

What are Paddles? These are two, well, paddles (see the image above) that are on the back of the controller that can be re-mapped to any button you want (for an extra fee).  What makes this amazing, is when you play a game like Call of Duty, where you can jump and fire, unless you do the infamous “claw grip” which is very uncomfortable and unnatural, you can’t turn or change your aiming, because your thumb has to come off the right joystick to press the jump button. Now, with SCUF perfectly placed paddles, you can use your ring finger — which normal has no function when playing video games, it just sweats and hangs out underneath the controller — to tap that paddle. So now, it works like this: Running with your left thumb on the left joystick, your left pointer finger pulls the aiming trigger, your left ring fingers taps the paddle, causing you to jump, while the right thumb moves your aiming left or right to find your target and your right pointer finger pulls your ‘fire’ trigger. It sounds tricky and honestly, it feels awkward at first. Like the first time you drive a car and you have to use a clutch and shift gears. Your hands have been trained to hold a controller a certain way, using only your thumbs and pointer fingers. So you have to retrain your brain slightly, but after a few games, you’ll get it and the longer you use it, the more natural and second nature it becomes.

How fast you can react to something makes all the difference. When you have to see something, an enemy or monster, your brain has to register it, send a signal to your hands and you have to pull the trigger. This can take a nano second, but believe it or not, that brief period of time is the difference between you and death when playing games like Call of Duty, Battlefield and other shooters. The PS4 controller and the Xbox One for that matter have great feeling triggers, but the require you to pull them all the way down to count as a full shot. With the Infinity controller you can use a small tool and change how far you need to press down the trigger to fire, using trigger stops. You can change the pressure and stops of each pull. This makes you’re ability to fire a weapon MUCH faster than your rivals, assuming they aren’t using a SCUF controller.What’s also cool is you can change the trigger’s appearance. You can use the standard button or like the images in the gallery, a new snap on trigger that is longer, allowing for multiple fingers to use the it. I wasn’t sure how this was going to work, but since using it, I can’t go back to normal triggers. In fact, there are so many amazing features on this controller, many of which are just no-brainers that makes you wonder why Sony and Microsoft never thought to implement them on their own controllers.

The new Infinity Controllers comes with a new, military grade grip texture on the back. This is the same grip texture that the military uses on weapons to prevent soldier’s hands from slipping. What’s even cooler, is when your hands do tend to sweat a little, the grip actually gets better. Of course, you could always buy some Gamer Grip, which will dry out your hands for like 4 hours, but honestly, with SCUF’s new grip, you may not need it.

I just want to say that while some may view a controller like this as something of a gimmick or an overpriced toy, let me reassure you that they are not. They are fantastic. Since using mine over the past 4-5 days, my gameplay experience and K/D’s (Kills to Death ratio) has certainly improved and using the back paddles has forever changed the way I play Call of Duty. Here’s just a few examples of my improved gameplay K/D. 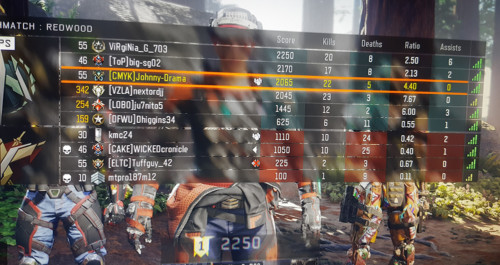 How I’m not in first here, frustrates me, but I guess those “assists” really add up. 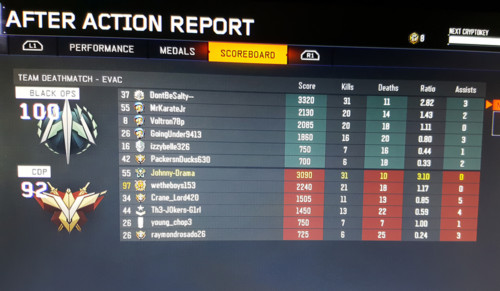 We lost, but I still did well, the guy in last place on my team, really didn’t help matters. 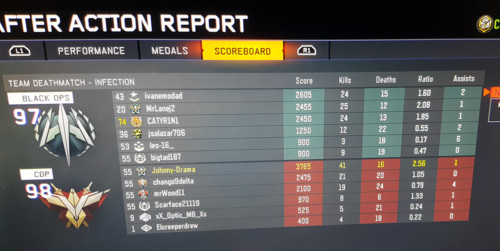 This game, man, it actually help me minimize from playing top online slot casino, cause man this game was incredible. I was on a tear, I knew I was doing well and so I had the PS4 transfer the clip to YouTube.  So I’ve linked it below. Feel free to watch it, I have some great streaks in there, but around the 9 minute mark, my team starts to fall apart, by 11 minutes I pull it back up and well, how it ends and with the time left is EPIC. Take a look.

That’s right, as you can see in the images above, the d-pad has a flat disk on it. This disk has 4 teeth that go into 4 small holes on the actual d-pad under it. It can be popped off and on in flash. But that disk is god send when playing racing games where you need to steer more accurately. I’ve never been a fan of steering cars in video games with a joystick, I always revert back to the d-pad (old habits). This disk is also killer for platforming and fighting games, where moves like “half-circles” are key to fighting combos, no longer do you press down with your thumb and try to rotate it so as it rolls over plastic to the right direction, where it pops back up causing you to make a mistake. With the game disk, pulling off combos, attacks and fatalities is super simple as it replicates the old style joysticks in the arcade. Some might say, why would you fight with a d-pad and not the joystick on the controller? To that I say, when moves, combos and specifically finishers are so nit picky with their sequences, back, forward, back, back, down, forward X, using a joystick can be a headache as it features to many ranges of direction. Example, when you think you’ve tapped back, but you really tapped back and down at a diagonal, because the joystick is so accurate, that doesn’t happen on d-pads.

Overall guys, this is something that if you game a lot and really enjoy gaming as something more than a 10 minute waste of time, you need to have in your collection. If you’re on an Xbox One, don’t worry, SCUF makes those too. Head over to www.SCUFGaming.com to see their whole line up.

Father’s Day is coming up, tell the wife (or husband) to head over to SCUF and get you one. It surely costs less than the jewelry, flowers, and card you bought her, right? You can check out more reviews for gaming products and accessories at https://25pc.com.

Till next time guys, Game On!