5 Awesome Inconveniences Our Kids Will Miss Out On

Inconvenience was one of my best professors when I was young. Granted, at the time I didn’t know it, dealing with petty annoyances manufactured some of the best memories from when I was little. It makes me wonder what the modern equivalent would be for my kids. Don’t worry, this isn’t a stale “Back In My Day” or “Kids Have It So Easy” post. I love the conveniences that my kids get and don’t plan on instituting the draconian house rules my dad did. He essentially wanted us to live in 1920’s rural Ireland. He elevated inconvenience into an art form.

“But… the TV came with a remote. Why can’t we use it?” or “ We need to stand next to the receiver to take calls on our wireless phone??”

“Why can’t we use hot water? It’s February.”

Here’s a short list of things endured that I loathed at the time, but in retrospect have turned into great memories.

My siblings (5) and I grew to know each other more in the hours waiting to get past the Whitestone and/or Throgs Neck bridge (NYC) than we did almost anywhere else. Not only were we crammed into a wood paneled station wagon with no hopes of escape from each other, but the leaded gas fumes belching out of the thousands of cars surrounding us acted as some sort of evil truth serum. A toxic diazepam that unmasked all of our psychological insecurities. Details of our psyche that would form the basis for decades of brutal and relentless exploitation from those who know and love us best. The close quarters served as both the inspiration for, and the defense against wanton cruelty. All by default. Those drives to Grandma and Aunt Margaret’s house were a master class in psychological warfare. If the CIA wanted to enhance their enhanced interrogation tactics, they should just put subjects in a car with my brother Brendan. He’ll have them quietly crying to themselves as they question their beliefs and very existence in the space of an hour.

Remember those things? Well sometime around 1986 the magic of call waiting came, and with it a whole new flurry of inconveniences. But nothing will ever replace the helplessness of calling home for that ride, or the sleepover permission you needed than busy signals. (I figured it was around 1986 when I read this unintentionally hilarious article about telephone etiquette. This guy must really be losing his mind now if splashing water irked him.) In retrospect, those busy signals gave me a better handle on patience. We knew that immediacy wasn’t a thing. Sometimes, you just couldn’t get through to someone and you just had to continue on with your life. It was a good lesson for dealing with the Becky’s of your workplace. Those people that, no matter what you do, you just can’t get through to. With the absence of the busy signal we, as a society gave up one of the best excuses for anything. “I called. It was busy.” can never again be employed.

Remember this archaic library system? So much information packed into those little cards! Sure they made it possible to find the book you were looking for, but when I was nine, it was only 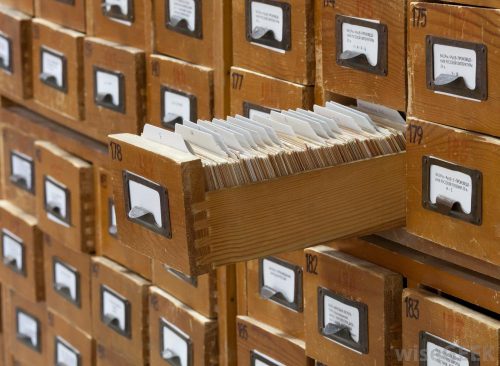 barely better than blindly throwing a dart at a room filled with bookshelves. I’d usually get myself to the right aisle and then spend the next 40 minutes going down the line trying to find what I was looking for only to discover it missing. Now it’s replaced with an online Card Catalogue that can reserve, look up, request and tell you which nearby library has the one you’re seeking. Looking back though, I loved the old system. Shuffling through the cards was like a little treasure hunt and scouring the shelves often yielded unexpected results. I discovered The Hobbit while searching for some other book when I was eight and it has remained one of my favorite books since then. The geek in me would have discovered it either way eventually, but back then it was just an obscure book that I stumbled upon while following the instructions on a 3X5 piece of cardboard. Another inconvenience transformed into magic for me.

I recall the day the movie ‘Big‘ came out on tape. I was so excited for it. I marked my calendar the very day that Blockbuster put the release date on their board above the registers. I got home from school that day and ran around the corner to the Blockbuster that was located roughly 200 yards from my house. There it was. A veritable sea of ‘Big’s taking up an entire wall. It was ceiling to floor Hanks……. and not one available.

Crushing, bitter disappointment. Much like the card catalogue, this was always a chance for adventure. Instead of returning home in 10 minutes with the movie I wanted I’d scour the shelves for something new, or re-discover an old favorite. If not, I’d eyeball the returns counter, hoping the title I was looking for would show up. I loved my times in Blockbuster and I wonder what the Netflix era equivalent would be for this? Titles that disappear? I’m looking at you, soon-to-be-gone Lost. Maybe soon I’ll be able to relive that experience thanks to this upcoming thing.

This one was inconvenient on multiple levels. On the one hand, we had to purchase entire albums to get that one song we liked. This was always a crapshoot. For every “I bought it for Sweet Child O’ Mine and the entire album is amazing” there was always 10 “I thought Chumbawamba would have been so much more than just ‘Tubthumping’”s . We would have to make the trek to Sam Goody’s or Virgin Records to get our music. A long pilgrimage on public transportation from my home. Even worse, I was into punk, rockabilly and ska that I couldn’t find at those 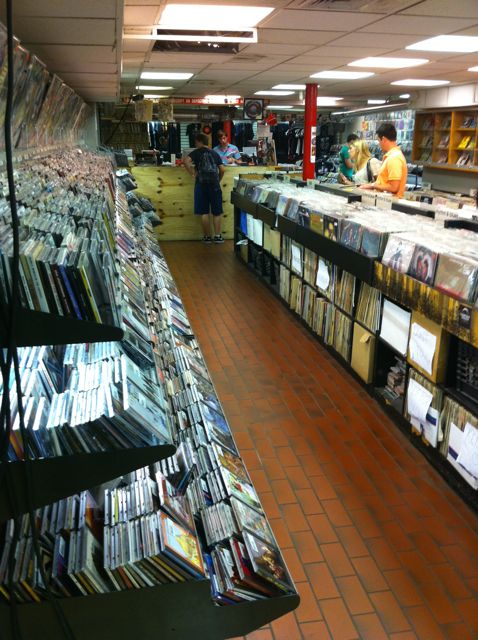 stores. So it would mean a trip into NYC to Generation Records, Second Coming and eventually Wowsville Records. I’d even have to make special stops at stores like Tang Records when on vacation on the West Coast to score music that hadn’t migrated East yet. Now if I want to listen to Stiff Little Fingers all I have to do is fire up Spotify on any of my 90 devices in the house that will play it. A lot of that experience of discovery and cutting school for the journey is gone. I’ll have to get my kids into some obscure hobbies so they’ll have similar adventures. Maybe bird calling, or fencing? Those seem like they’d invite exploration or something. Plus, probably way less heroin addicts to contend with in Greenwich Village.

So I wonder what it will be for my kids. I’m guessing they’ll look back on their past through the retina display screens and bring up images of frustration at weak wifi signals or actually having to buy gas for cars. Whatever it is, I hope they’re able to turn it into a good thing, because sometimes the worst things can be the best. Even if you don’t know it at the time.