Dad Calls Up Nike To Complain That The Dad-Shoe Style Is Trending On Instaface.

It isn’t every day that a Dad calls Nike to complain about a shoe trend.

Patrick Hamilton from Springfield, Illinois was fine not being a trendsetter. He never considered himself hip. He loved to just go about his business without the worry of people bothering him.

That was until recently when local high school kids began complementing him on his footwear, yelling “nice kicks!” as they zipped by him in the neighborhood.

At first, he was wholly unaware that the ‘youth’ weren’t poking fun, but rather showing adulation on his wardrobe choice. It wasn’t until a Tuesday afternoon in April at the mall with his kids, that someone stopped to pay him a legitimate courtesy on his footwear. His kids picked up on the puzzled look that adorned their dad’s face.

“My kids could tell that I was confused. They told me that I just received a compliment on my sneakers.” Patrick informed Life of Dad. “Apparently, the style of my sneakers are trending on Instaface or Twitterbook.”

Hamilton told us that he once jumped back, almost leveled himself to the floor out of fright when, as he puts it, a rambunctious tween yelled to him, “What are those?”

“He nearly made me jump out of my amazingly comfortable shoes.” exclaimed Patrick.

If you’re a sneakerhead, you know that a few months back Steph Curry came out with a version of his sneakers that looked like what your dad would wear at a 4th of July BBQ.

Taking back his style…

Hamilton is fed up with his kids generation trying to take over the dad shoe trend. He’s stormed into multiple sneaker stores in the Illinois area to get the store employees to move the dad shoes out of the main window. He confessed to them that his sneakers are the only type of shoe that doesn’t inflame his gout. He pleaded with them to put them somewhere less conspicuous, but they refused to move the hottest selling dad sneakers out of the heavy traffic areas.

“What’s happening here, what they’re doing – it’s going to drive up the price of my sacred shoe..” said Hamilton.

But Patrick was not giving up. He decided to go straight to the source. He phoned customer service at Nike and demanded that the shoe company stop advertising these new dad shoes to the youth. The call quickly escalated to a night supervisor when Patrick wasn’t getting his way.

Patrick’s son, Cory tells us how that call went.

“I’ve never seen my dad get that heated before. He wasn’t this mad when I snapped the shaft on his Callaway 3-wood. He kept yelling to the person on the phone that this was the only piece of clothing he’s fallen in love with and that Nike is solely responsible for taking that foot-romance away from him.” said Cory.

After three days of caffeine-fueled around-the-clock calls to the reps at Nike, Patrick is now on the hunt for a sneaker that isn’t so exploited.

“I’ve got a lot of work to do.” Hamilton tells us. “I have a new hobby now. I’ll make it my goal in life to find a shoe that is just as comfortable, but kids hate it.”

We hope Patrick finds his new shoes and he can go back to being a non-trendsetter.

Unfortunately for Patrick, companies like Nike and Reebok have begun to follow the trend to create shoes that could only be seen in your father’s closet.

The evolution of the dad shoe.

Our sources confirm that Nike is now working on a shoe called the M2K Tekno. This sneaker is influenced from one of the original “OG” dad sneakers, the Nike Monarch. It seems as if Nike wanted the M2K Tekno shoe to pay homage to the Monarch by keeping its profile as some might say “as chunky as possible.”

“The goal in designing the M2K Techno was to maintain the Monarch’s authentically bold stance while creating fresh features, thus revising what the Monarch could be for 2018,” Nike designer Jin Hong said in a statement.

Is the shoe for dads or moms?

Dads might gravitate to this new upgraded dad shoe, but Nike made these for moms not dads. “We designed the shoe for women, so it’s really refreshing to see men taking a keen interest,” Hong said. 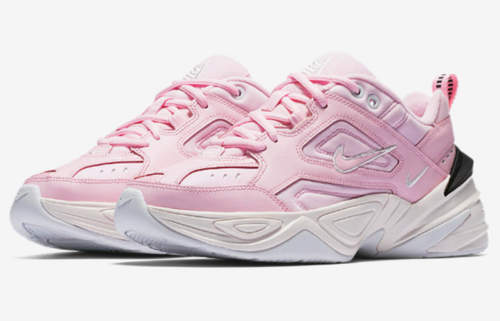 The mom shoe from Nike.

So…will the dad-shoe trend still be a thing? Would you rock shoes that look like you jacked them from your old man’s closet? Let us know. Hopefully for Patrick and other dads like him, this trend will be short-lived.