Remember when you were a kid and got really excited when a new family was moving into the neighborhood? You were wondering if the family moving in had kids your age and if they liked the same things you did. Maybe it was another kid to play flashlight tag with, or play second base in your neighborhood’s baseball team.

For one neighborhood, that curiosity and excitement was bubbling up, and it was not just from the kids, but from the parents too. Well, most of the parents.

The hype around the new neighbors….

For the fine folks over in Hampton Falls, NH, one suburban street was a buzz with chatter of a new family moving in. And the ladies of the hood were giddy to hear that the husband was a model.

How did they learn about the man’s profession? Well, according to one of the women on the street whose sister is friends with the neighbor of the real estate agent who sold the house to the newcomers, this is not just hot gossip.

“I was a little taken aback when I found out that we would be living to a model. I mean, it is not just for the eye-candy, but just imagine all of his famous friends coming over for parties.”, Patrice Nelson said.

The neighborhood dads were getting nervous….

While most of the street was preparing to welcome the famous neighbors in a few weeks into the subdivision, the dads got together for a much needed man-to-man meeting.

“Who cares what the guy does for a living?!”, Cory Mattock said. “So, the guy is a friggin’ supermodel. Whoopity doo! That’s not going to increase our property value. Just bring the paparazzi.”

“Having a male model on our street is not going to be fun. Talking with the other guys, we all agreed that sooner or later our wives will be asking us to ditch the dad bod.”, Drew Riles added.

To cut the issue of the nagging wives off at the pass, the men took action.

“We all decided to join a gym together. Misery loves company right?”, Riles said.

The following weekend, the dads all went to their first spin class together. A few made it through the whole session, while others needed to jet out from the class halfway through it.

Some of the dads kept up with the gym routine, while others made up excuses on why they couldn’t make it and keep up with the schedule. Even though they did a lot of complaining, the guys really did enjoy that time together.

“It gets us out of the house. I am actually able to see my feet again.”, Cory shared. “Even though we started going to the gym for the wrong reason, it has been beneficial.”

Time to meet the new neighbors….

Finally, moving in day had arrived. Every family seemed to find some outdoor chore to do that morning. From cleaning the gutters, to washing the car, nearly everyone in the entire street was outside to get a glimpse of their new neighbors.

As the large moving truck made it down the street, a white Cadillac Escalade followed right behind. You could hear all the women gasp as they were finally going to feast their eyes of the new dad on the block.

The SUV parked in the driveway, and two kids immediately jumped out to inspect the new home. The wife got out next and helped the kids inside. Then the driver’s door opened up. This was it! The moment everyone was waiting for. The hunk to grace the street with his incredible looks and charming presence.

To everyone’s surprise, a short, stocky man got out of the SUV. He was balding in the back and had a small beer belly. He was rocking a full-on dad bod.

“A hand model! He’s a hand model! The other guys and I had a laugh over the whole thing!”, Riles exclaimed. “Turns out, the dude’s a model for some uppity watch company.” 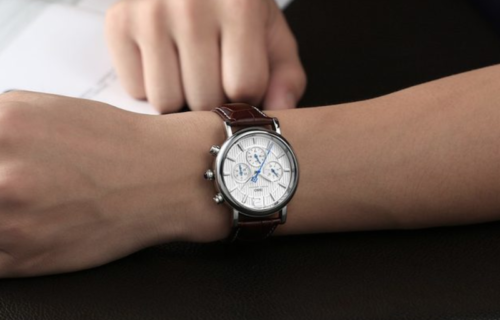 The hands of an angel

A few of the guys from the street cancelled their gym membership that day. Others kept on going.

One thing was certain: the neighborhood has never seen hands like that before.

“It was like he had the hands of angel!”, Cory exclaimed in awe. “Turns out, Jim is a really funny guy. He even laughed at all of us guys who joined a gym when we found out a male model was moving in.”

For more stories like this check out: This School’s Senior Prank Is Simply Smashing.