Etan Thomas Talks Fatherhood, Playing In The NBA And Why Athletes Matter

Etan Thomas is this week’s guest on The Life of Dad Show.

Etan talks with me about his new book, We Matter: Athletes and Activism as well as his earlier book, Fatherhood: Rising to the Ultimate Challenge, fatherhood and playing in the NBA. Thomas shares his insights about why he needed to write his latest book and what he hopes people will gain from reading it. 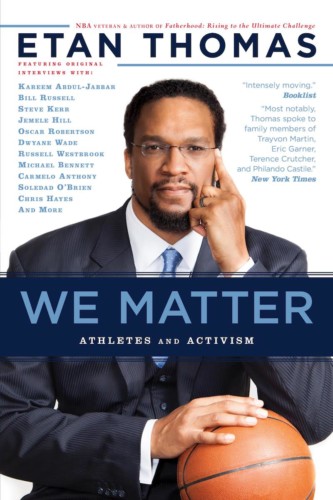 Thomas then goes into what it means for him to be a father and the differences between the time he was growing up to now as his children are growing up. You can tell from my interview with Etan that he takes the role of being a dad very seriously. Etan describes this life as an NBA player and the impact he had in his community.

Etan Thomas a former eleven-year NBA player, was born in Harlem and raised in Tulsa, Oklahoma. He has published three books: a collection of poems titled More Than an Athlete, the motivational book Fatherhood: Rising to the Ultimate Challenge, and Voices of the Future, a collection of poems and essays by young writers from around the country.

Thomas was honored for social justice advocacy as the recipient of the 2010 National Basketball Players Association Community Contribution Award, as well as the 2009 Dr. Martin Luther King Jr. Foundation Legacy Award. His writing has appeared in the Washington Post, the Huffington Post, CNN, and ESPN. He can be frequently seen on MSNBC as a special correspondent and he cohosts a weekly local radio show, The Collision, on WPFW in Washington, DC, about the place where sports and politics collide.

Make sure follow Etan on Twitter at @EtanThomas36 and his website etanthomas.com and pick up his book We Matter: Athletes And Activism where books are sold.