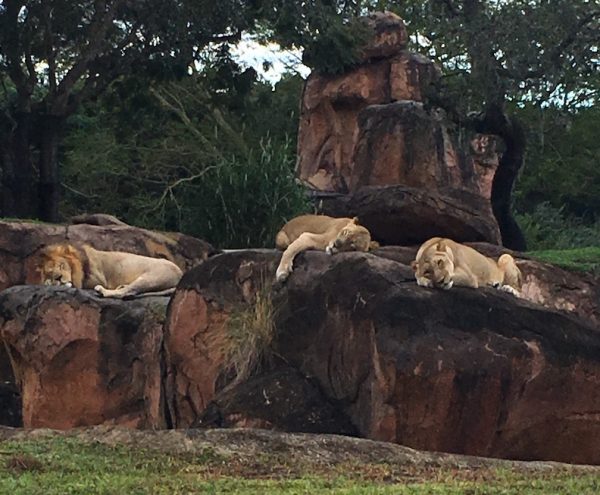 They say that art imitates life and that life imitates art. Jon Favreau and his team believed in that notion as they were preparing to make The Lion King. Favreau and some of the talented people that worked on the film went to Disney World’s Animal Kingdom to see how lions and other animals interacted in real life to make sure they captured the essence of these animals for the film.

I followed suit when Disney invited me for a Lion King event. I was able to get a behind the scenes look at these amazing animals in real life. Besides going on a private safari and getting a tour of certain parts of the park I was able to sit down with Rob Legato, Claire Martin and Jon Ross. All three did their part to make The Lion King a box office smash hit.

Rob Legato is no stranger to making movies. Rob has won a few Academy Awards for visual effects and teamed up again with Jon Favreau. He worked with Jon for The Jungle Book and now with another beloved Disney classic in The Lion King. Besides having a passion for movies, Rob also loves being a dad. We talked about the work he put into creating visual effects for The Lion King and fatherhood.

For my interviews with Claire Martin and Jon Ross, I was able to chat with them about the fantastic work they do behind the scenes. Claire Martin is the Senior Manager of Conservation Programs and Partnerships for Disney Enterprise Social Responsibility. Jon Ross’ current role is with Disney’s Animals in Film & TV. Jon collaborates with film, television and digital productions across the company to achieve creative goals while ensuring adherence to Disney’s policies and standards around the use of live animals on set.

In both interviews I learned about how Disney not only looks to entertain people, but also create a sense of responsibility with programs like Protect The Pride. In celebration of the of Disney’s The Lion King, The Walt Disney Company is proud to announce a global conservation campaign to raise awareness and support the dwindling lion population across Africa.

Since Disney’s The Lion King was first released in theaters 25 years ago, half of Africa’s lions have disappeared. Lions face rising threats, such as poaching, loss of prey and destruction of habitats.  However, research shows the lion population can recover. Disney has already donated more than $2.9 million to the Wildlife Conservation Network’s Lion Recovery Fund and its partners, and will make additional grants as well as invite fans to participate and help increase the donation—for a total contribution of up to $3 million. Fans may participate by taking part in celebratory experiences and purchasing special edition products, as part of The Lion King Protect the Pride campaign. I am really grateful to Disney for not only a once in a lifetime experience, but learning how Disney is making sure to protect animals and our planet. I highly encourage you to show the Protect the Pride segment that is on The Lion King bonus feature section. You and your family will enjoy the movie and you can educate your family on how we can all make a difference. That way we can all help continue and perpetuate the Circle of Life. The Lion King is available now on Digital in HD and 4K Ultra HD and Movies Anywhere and physically on 4K Ultra HD, Blu-ray and DVD Oct. 22. To win a copy of The Lion King follow me on Twitter @ArtEddy3 and let me know your favorite Lion King character.

(Please note: Disney sent me on this media trip, but my thoughts are my own.)