Brad Meltzer, Tom Angleberger and Jeff Kinney are this week’s guests for the Life of Dad Show Remix.

This episode of The Life of Dad Show Remix shines the spotlight on three amazing authors. In this episode you will get to hear my interviews with Brad Meltzer, Tom Angleberger and Jeff Kinney. These three great dads have books that are family friendly and are great reads for all ages. These interviews were from previous episodes of The Life of Dad Show and highlights their conversations on fatherhood. Leave a review on iTunes or wherever you download the podcast for a chance to win a Life of Dad prize pack!

Brad Meltzer and his family

Brad Meltzer is a #1 New York Times bestselling author of adult thrillers including The Inner Circle and The Fifth Assassin. His two nonfiction gift books, Heroes for My Son and Heroes for My Daughter were New York Times Bestsellers as well, and he has won the prestigious Eisner Award for his comic book work, Justice League of America. Brad is also the host of the History Channel TV show Brad Meltzer’s Decoded.

Brad feels that we can all be heroes and that is seen in his inspiring books series called Ordinary People Change the World. Meltzer has a bunch of these books in this series that will become favorites in your family’s library.

Brad currently lives in Florida with his wife, and his three children.

Tom Angleberger is the author of the bestselling Origami Yoda series, as well as Horton Halfpott and Fake Mustache, both Edgar Award nominees, the Qwikpick Papers series, and the Inspector Flytrap series. He lives in Virginia, with his wife, who is also an author and illustrator, Cece Bell and their two children. I had the great pleasure of chatting with Tom about fatherhood. 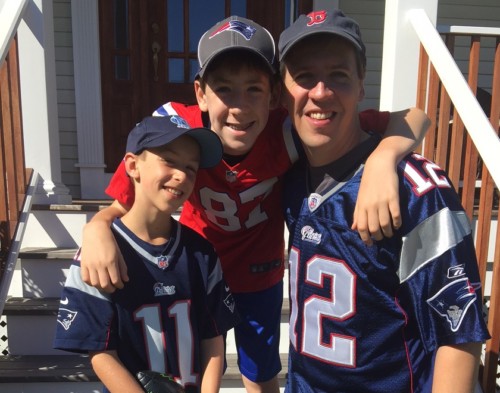 Jeff Kinney and his family

In 1998 Jeff Kinney came up with the idea for Diary of a Wimpy Kid, a story about a middle-school weakling named Greg Heffley. Jeff worked on his book for almost eight years before showing it to a publisher in New York.

Since initial publication in 2007, the series has gone on to win many regional and national awards around the globe including two Children’s Choice Book Awards and five Nickelodeon Kids’ Choice Awards for Favorite Book. Jeff Kinney was named one of Time magazine’s most influential people in the world. In addition, three movies based on the book series have grossed more than $250 million internationally.

Jeff moved to New England in 1995. Jeff lives with his wife and two sons in Massachusetts, where they own a bookstore, An Unlikely Story.