Lunch Break – Do You Let Your Kids Win When Playing Games With Them? 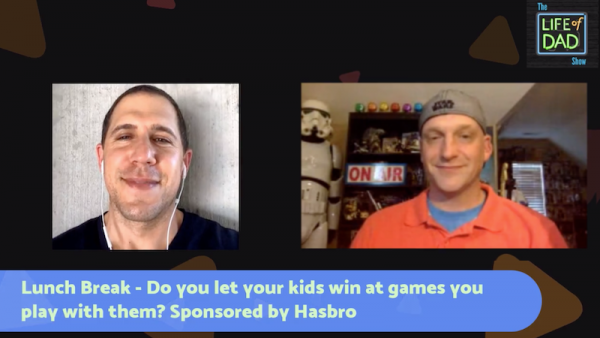 Do You Let Your Kids Win When Playing Games With Them?

Do you let your kids win games when they play against you? The Lunch Break hosts, Art Eddy and Jon Finkel talk about this topic and how they play games with their kids. Are there certain age for a child where parents should not let their child win? Let us know your thoughts in the comment section below. We will give you a chance to win a copy of the new game Plumber Pants from Hasbro, who is today’s show sponsor.

Oh no…the plumber is fixing a clog under the sink and he’s getting pranked! His pants just might fall down…and that means everyone gets sprayed with water! In this Plumber Pants game, players take turns raiding his toolbox and loading the tools onto his belt. Be careful! If the plumber’s pants fall down on a player’s turn, water will spray from the sink, and that player will be out. The only player not to make his pants fall down wins. PLUMBER PANTS game includes game unit, plastic faucet, 10 plastic tools, toolbox, and instructions. Available at most major retailers nationwide.

What some of our audience said:

Jean-Paul Mosquera ·  I actually enjoy watching my kids win. Shows their focus and dedication to a game and them not giving up to win.

Randy Mains ·  No it is a better and more required skill to lose than to know how to win.

About The Lunch Break Show Hosts: