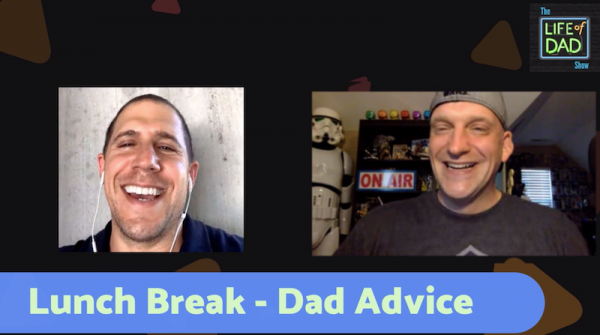 What is some of your best dad advice?

Ask the dads! Today’s Lunch Break Show is a free for all. The Lunch Break hosts, Art Eddy and Jon Finkel talk all things fatherhood. Our viewers gave some of their own dad advice!

Dave Frank ·  One thing I have to remind myself sometimes: so simple, but it’s hard sometimes; don’t forget what it was like to be a kid! not everything has to have structure! If your kid wants to make a mud pit, don’t worry about the mess. They want to build a tower out of stuff around the house? We can clean up after! Be a kid with them, they’ll never forget it.

Owen Teece ·  We let the children lead the playtime and learning in the house. As Dave says, you can clean up afterwards. The only real strict structure we have in place is the bed time routine when all the kids must be in bed by 7pm.

Chris Seastrand · Advice from my grandpa, if you do me one favor in your whole life don’t go in the goddamn Marine Corps!

Jenn Townes · Advice from my dad: Always keep blankets, food and water in the boot of your car for emergencies.

Raymond Jackson ·  Thanks for the help show I. I need breaks too