Lunch Break – What Is One Thing You Have To Repeat To Your Kids Over And Over Again? 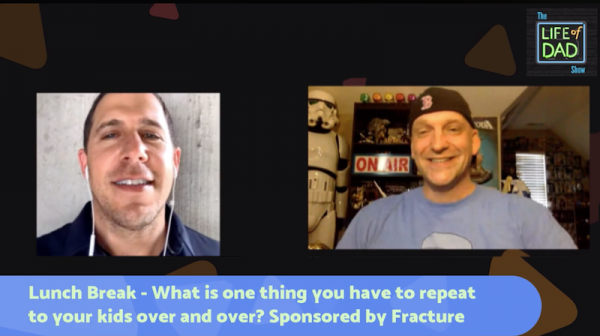 What is the one thing you have to keep on telling your kids to do over and over again?

The struggle is real and share your thoughts in the comment section as the Lunch Break Show hosts, Art Eddy and Jon Finkel talk about this week’s topic. This week’s show is brought to you by Fracture. We are giving you a chance to win a $70 Fracture gift card.

Fracture looks to help you share your stories and savor your memories. Fracture believes that sharing stories with one another is an essential part of being human. Fracture creates prints that are perfect gifts for birthdays and special occasions. For more information go to fractureme.com.

What some of our viewers said on today’s show:

Brian Taylor · We live in Texas so it’s super hot, both our boys like to open the back door all the way and stand there with it open and have a conversation. “Close the door!”

Joe L. Williams ·  Look both ways before crossing the street or walking to car!!!

Melanie Martin ·  Everything! Everything has to be said repeatedly…. 😳🤪🤦‍♀️🤷‍♀️

Kelly Clark · Every night my kids seem to forget how to get ready for bed……they need to be told every step of the way what to do just about every night…….amazing

About The Lunch Break Hosts