The Sixth Month of Pregnancy: Defender of the Uterus.

Welcome to month six of your pregnancy! Ever do a kitchen rebuild? Neither have we… but we get the general concept. You need to add beams here, take some away there, get the pipes and electric roughed in, measure cabinets and all that. Once that’s all done, you start the work on installing all the fancy stuff.

Perhaps it’s a wild metaphor, but this is pretty much the phase your baby is in from this point on. All of the ‘bones’ are there, we just need a few more Saturdays to find the right color (eye and hair pigmentation) for the walls and fill it up a little with (baby fat to fill saggy skin) a few everyday items. Instead of granite countertops and crown molding, we’re talking about making taste buds and trying not to be translucent….that sort of thing. 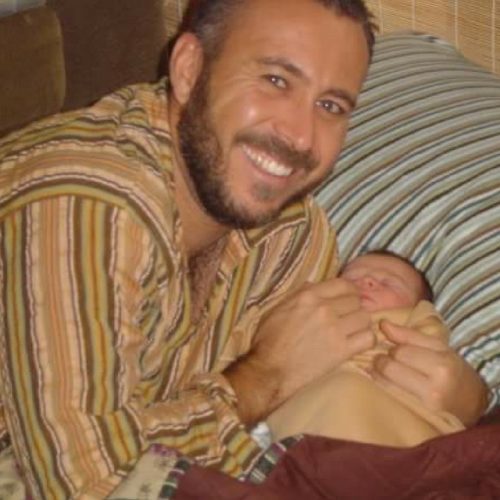 Darren Mattock, partner at Life of Dad, not afraid to share his joy in becoming a father. Also, not allowed to pick out the wallpaper on this remodel.

In all seriousness, your ‘renovated kitchen burrito’ is approximately 11 inches long and has fingerprints! When “CSI, Womb” inevitably premieres, your little one had better be careful to wear gloves when committing baby crimes.

Your lady friend now has a uterus that’s about the size of a soccer ball. When you’re out in public, prepare to go into Miyagi mode because – the hands. Oh, the hands. So many strangers are going to want to touch that belly. You’re gonna have to square up and knife-hand chop them out of the way! If you’ve been one of those people who think it’s ok to rub a pregnant belly, it’s time someone told you to not be. Want a fantastic deterrent for the hands of strangers that do make it onto your lady’s belly? 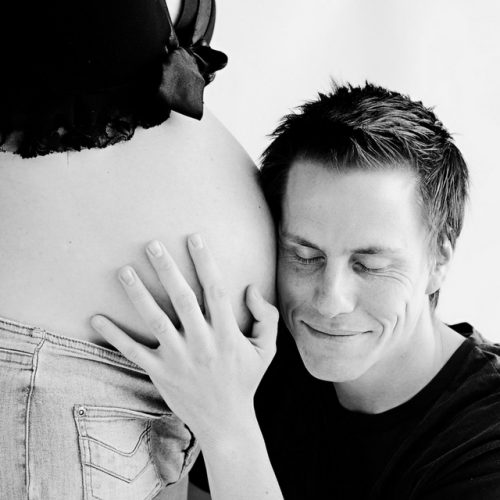 Rub the offender’s belly at the same time. It’ll be awkward for the both of you, but it’ll drive the point home super quickly that you shouldn’t be rubbing stranger’s torsos. Look them in the eyes when you’re doing it. Make it personal. Make it weird.

However, maybe your lady is one of the few that welcome the rub of good luck. In this case, perhaps you should fashion a donation box and walk around behind her at the mall.. A dollar a rub. After all, those diapers aren’t cheap, folks. Neither is college. What better way to start saving than in utero (more than just a Nirvana album!)

Other than having to deal with the oily grasps of clueless strangers, your lady will be experiencing much of the same symptoms she had in the last month. However…… she could also be experiencing something that can benefit you both. Heightened sexual response!

Remember when you saw your friend’s cousin Rachel at his bar mitzvah all those years ago? That torrent of hormones that blasted through you and remained for the decade that followed? That’s her, now. Have some fun, you two.

Your time for traveling distances is slowly closing. Not only is it tough to do long drives because of frequent urination, but air travel will be restricted soon enough. It varies from lady to lady, but if you have relatives to see or debts to collect from old friends in different cities, start booking now. Or just book somewhere awesome in case the baby comes. Hawaii would be a nice place to be stuck in, wouldn’t it?