This week on the Life of Dad Sports Show we bring on former MLB pitcher, Tommy John and his son Dr. Tommy John to help parents with keeping their kids healthy while playing sports. We also talk about Dr. John’s book, Minimize Injury, Maximize Performance.

The book comes out June 5th and you can pre-order it here. Dr. Tommy John’s unique program: a diet, lifestyle, and movement plan (Rethink. Rebuild. Replenish. Recover) for injury- and performance-proofing young athletes in every sport. 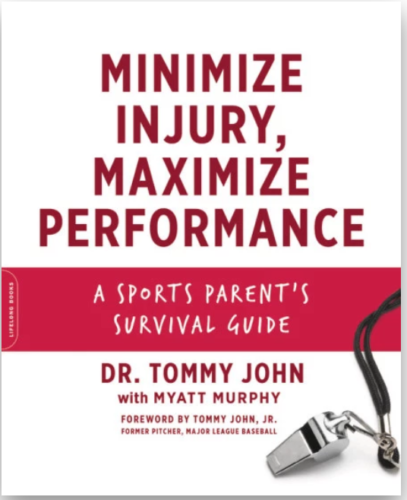 Beginning as early as age 6 and continuing through the teenage years and on into their twenties, both male and female athletes are more at risk of serious injuries at younger ages than ever before. Dr. Tommy John, son of lefty pitcher Tommy John and also a sports performance and healing specialist, offers an invaluable diet, lifestyle, and movement plan (Rethink. Rebuild. Replenish. Recover) for injury- and performance-proofing young athletes in every sport. Dr. John explores the sudden rise of Tommy John surgeries being performed on young athletes today, as well as the many injuries–and the surgeries required to fix them–increasing at an alarming rate in baseball and all youth sports. Dr. John’s book outlines the three top causes behind this “injury epidemic”: The American lifestyle, the business of youth sports (from coaches to corporations), and the decisions we believe as parents are truly benefiting our children. Minimize Injury, Maximize Performance focuses on prevention, and also offers tips on how to tailor the advice for athletes coming back from an injury, with over 120 black and white photographs.

John’s 288 career victories rank as the seventh highest total among left-handers in major league history. He is also known for the surgery, now named after him, which was performed on a damaged ligament in his pitching arm. Over half of John’s career wins came after his surgery.

Dr. Tommy John has been a trainer for 14 years. After playing Division 1 college baseball at Furman University for 4 years, pitching professionally for 3 years, he owned and operated Tommy John Baseball Performance Co. where he conducted over 11,000 baseball lessons. He has since realized that there is something bigger to training the body, healing from any injury, and improving a skill of a sport. He found that to be Chiropractic. He is now a Doctor of Chiropractic and will spend the rest of his working days educating people on what it means to have a perfectly functioning nervous system….the system that governs all other systems of the body.

About The Life of Dad Show Hosts

Jon Finkel has written for Men’s Health, Men’s Fitness, Muscle & Fitness, GQ, Details, The New York Times, AskMen.com, ComedyCentral.com and Yahoo! Sports’ ThePostGame.com. He was the Editor-in-Chief and founder of the National Football Foundation & College Football Hall of Fame’s website, FootballMatters.org, as well as the founder of SweatBeforeSix.com. He is currently the Publisher at Beckett Media and hosts a Facebook Live Sports Show for LifeofDad.com.

For more videos like these check out the Sports Show series.