Tom Warburton is this week’s guest for The Life of Dad Show.

Tom Warburton talks with Art Eddy about his role as the executive producer of Disney Junior’s reimagined Muppet Babies, his love for the show and characters, and how he introduced a new character into the mix. Tom also shares his thoughts on fatherhood, what he is looking to teach his kids as they grow up and the inspiration for drawing on his kids lunch bags.

Often credited as Mr. Warburton, he is best known for creating the hit animated series Codename: Kids Next Door.

He is also a frequent collaborator with Caldecott Medal Award winner and New York Times best-selling author/illustrator, Mo Willems. Together the two have co-authored two books, including the recently released We Are in an ART-ivity Book! (An Elephant and Piggie Book). The duo have also worked together on several television series including Sheep in The Big City. 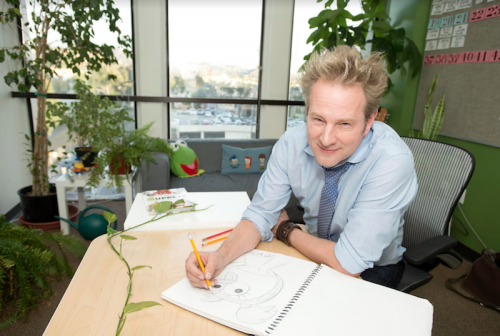 In 2009, Warburton wrote and illustrated the children’s book 1000 Times No.

Originally from Ambler, Pennsylvania, Warburton attended Kutztown University. He currently resides in Los Angeles with his wife and sons, Parker and Kelley, who he has been creating custom, illustrated lunch bags for since 2013.