Why I Love Being a Bald Dad 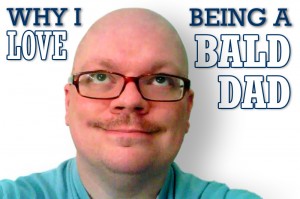 I’ve been shaving my head regularly for about 14 years now. Most people I know other than long-time friends and family have no idea what I look like with hair, in fact, unless I’ve specifically brought out old photos from my Hall of Shame.

The Bowl Cut. The Martin Prince. The Ponytail.

And worst of all, The Mullet.

All were terrible in their own way, with the plentiful-but-light-as-a-feather hair that I inherited from my mom just not really good for much without out far more fuss and goop than I was willing to manage.

And so one day in 1999 I decided to bite the bullet and shave my head. A friend came over and helped me buzz it down, and then I took a razor to it. There was some learning curve involved, but I’ve never looked back or regretted it.

[NOTE: I made the mistake of shaving my head for the first time in February, while living in Calgary, Canada, where the average high is 0°C (or 32°F). I would not recommend this, unless you have already purchased some very, very warm headgear.]

When I became a dad — particularly a full-time stay-at-home dad — my shiny bald head turned out to hold several advantages for me.

Every parent of young kids quickly develops an earnest, heartfelt nostalgia and appreciation for the simple act of being able to take a long, relaxed, uninterrupted shower. Once those kids reach a certain age — you know, the one where they can no longer be expected to remain in one place for long? — the luxury of a long shower is largely a thing of the past.

But when your head is shaved? Well dang, you just cut a whole lot of time out of the needed window to catch a quick shower before the baby wakes up, the toddler climbs the bookshelf, or the preschooler decided to try walking to Disneyland by himself.

No time to shower at all on any given day? No Problem. Unless you’re carrying a cloud of stink around with you, no one will be the wiser based on any sort of obvious bed-head or a wild, unwashed mass on top of your head.

Just think of the money on shampoo and conditioner and haircuts that you’ll be saving!

Both of our boys went through a phase when they were really young and still exploring ways their little hands could interact the word around them where they would grab handfuls of my wife’s hair, and yank. OUCH. It looked painful, but I can only guess, since my hair has been unpullable for 14 years.

I suggested she shave her head too, but she declined.

(Incidentally, this is also a good reason to switch from glasses to contact lenses!)

Parenting is messy. Very, very messy. Whether it’s thrown pureed sweet potatoes, projectile spit-up, or a mid-change fountain of pee, the things that one can find in the hair of a new parent is pretty astounding.

Wouldn’t you prefer to be able to deal with such instances with a quick wipe down, rather than needing to find time for a shower (see #1) every time your child uses your head as a canvas?

Seriously, I have never been called “sir” more in my life than after I started shaving my head.

There’s just something about it that makes people be a little more polite. I can’t really explain it, and it’s never felt like there is any unwanted level of intimidation coming across. But when I have to pull out my Grown Up Voice on the playground, to address some kid who is up to no good? There is never any question about who is the adult, and who needs to listen.

(Note: respect from my own children remains unaffected.)

I asked a few of my other bald-headed Dad Blogger friends about why they love being a Bald Dad, and here’s what they had to say:

“Makes me more aerodynamic when I am chasing after the kids. I know my kids will never find a hair in their food. I have saved the family lots of money on hair brushes, shampoo, and haircuts.” – Chris Bernholdt, DadNCharge

“It takes like 30 secs in the shower – saves a ton of money. It gives me an excuse to rationalize buying cool hats, which is a must for a bald dude in virtually every season.” – Mike Evans, Secret Dad Society

“Absolutely crucial for maintaining the upper hand in rough housing. I gotta be able to escape a headlock when my boy is 6’2″ and 240lbs, I think a smooth head helps with that.” – Eric B., Dad On The Run

“I shave with a straight razor… makes me look real bad ass to my boys.” – Shaka Armstrong, Digital Shepherds

“For a dad in the Great White North my baldness ensures I never have toque-head.” – James Hudyma, Dads Round Table

Have you ever taken the plunge and gone full eightball? What do you think are the biggest advantages?