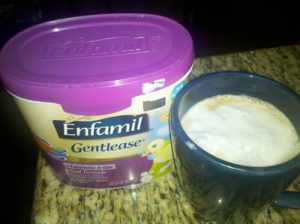 This may be the worst idea I have ever had.

I have 1-2 cups of coffee every morning, and now they taste even better from my new Coffee Bean CBTL machine (I’ll talk more about this machine in another post soon).  This coffeemaker has the ability to make coffee, tea, espresso, and more.  Since I can now make them, I’ve really started to enjoy a good café latte.

Well, a latte consists of espresso and milk.  This past Monday, when I was writing a column for this very website, I realized that we were out of milk.  Cow milk, that is, but it turns out we had plenty of baby formula.

This got me thinking…what if I made a baby formula latte? My wife and daughter were sound asleep, so they’d never know.  I hesitated for about a minute thinking about it, but then realized that this was a brilliant idea.  I mixed one cup of water with 1.5 scoops of baby formula, and placed it in the frother.  A frother heats up the milk.  I didn’t know this until about a month ago.

I added the foamy baby formula milk to a shot of espresso, and poured this man baby drink into my favorite mug.

Very excited, I gave the blend a good sniff, and realized that it smelled like, well, heated up baby formula mixed with coffee.  Not a good start to this dream drink.

Then I just starting staring at it, realizing this could turn terribly wrong.  I had to go for it, though.  I took my first sip.

It tasted like a combination of espresso, hot water, and the white powder that only babies are supposed to eat.  Then it started to smell a lot like my baby’s poop.  My inner monologue started screaming at me in a thick Boston accent…

Come on Tommy Boy, be a man…you’re not gonna give up already, are ya?

After sip number two, I almost vomited.  I suddenly started to understand why babies spit up all the time; they are drinking this stuff (minus the caffeine).

I smelled my baby powder coffee again, and it started to grow on me.  I took sip number three, and it tasted worse.  I started thinking, am I the first person in the history of mankind to drink a baby formula café latte?

Hey Tommy…are you a chicken?  You really can’t drink what your daughter has been drinking for a year?  (Insert mocking chicken sounds)

I became preoccupied while checking emails, and tried to take a sip without thinking about it…I gagged.

When I start a challenge, I want to finish it.  I’m a very competitive person, so I decided to take a really big gulp.

I nearly vomited again.  My head tilted forward as my throat tightened up, leaving me in upchuck position.

Tommy, are you a man or are you a baby?  Just drink the beverage, you imbecile.

As I continued to sip, I realized that this infant coffee was getting better as it was cooling down a bit.  It was straight up nasty when it was hot.  I started to enjoy a granola bar while sipping, and things were good.  I started to believe in myself again.

That’s more like it Tommy, you’re finally becoming a man now…I’m proud of you.

Then I took what ended up being my final sip.  It was horrible.  It tasted like hubcaps with mayonnaise.  I gagged.  I dumped the baby formula latte down the sink, and rushed to brush my teeth.

Am I a failure?

Has anybody in the history of the world ever finished a baby formula latte?  I guess we’ll never know.