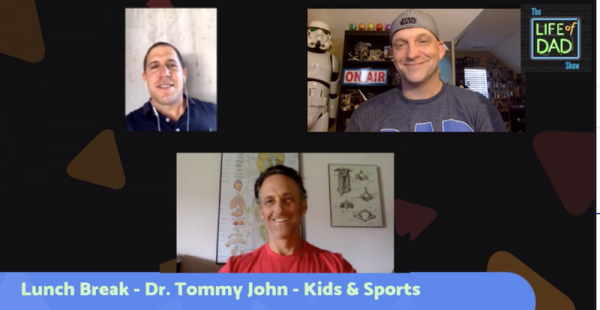 Dr. Tommy John is our guest on this week’s Lunch Break show.

Barbara Ketcherside ·  Young kids need to do this for fun and exercise and to learn team membership–not to get the illusive college scholarships. My kids tried a little of everything–loved basketball though and even reffed. That showed them how horrible sports parents can be–even worse than theatre parents.

John Keating · I think variety is good when their young. they can choose later on what they like.

S.E. Morgan · Since kids started to specialize in sport earlier there has been an increase overuse injuries.
Matt Sullivan ·  My son plays Baseball and Basketball. I coach his Baseball team, and I have a blast doing it.
Blake Sutherland ·  Lacrosse, Box and Field Dr. Tommy John operates Tommy John Performance and Healing Center out of San Diego, a private practice that provides both athletes and entire families with integrative, individualized care plans and treatment to improve their quality of life by reducing physical and emotional pain from injury and aging and minimizing the use of pharmaceuticals or surgery. Dr. John has Master Degrees in Health and Exercise Science from Furman University and a Doctor of Chiropractic Degree from Life University, in Marietta, Georgia.