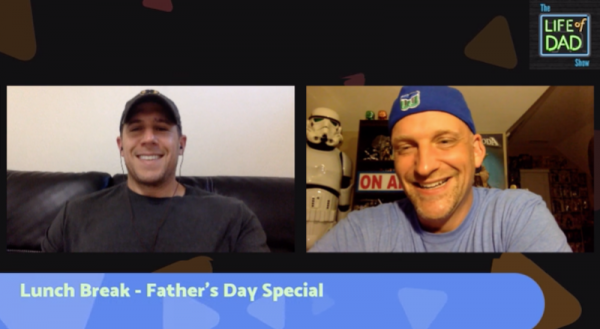 We are doing a special Father’s Day show here at Life of Dad. The Lunch Break hosts, Art Eddy and Jon Finkel talk about all things fatherhood. From advice to priceless moments to how fatherhood has changed their lives.

Chubz Oddsock Hales ·  I love the random moments my boys just want a hug from me. The way my kids want to give up but keep going because they to succeed you gotta push through. Their interest in superheroes and their little creative minds working over time to create something amazing!

Veronica Caputo ·  I love the comment of letting your kids pick the thing they learn from you. As a mom, I read your posts regularly. I work out of the house and thankfully my husband stays home. My husband and I met in a band, now in 4th grade our oldest wants to pick an instrument. We are thrilled and haven’t pushed, but he asked if “once I practice can I join the band”.

Kelly Clark ·  fathers day is a mixed bag for me….i hate to say. I love being a dad, and I have 2 great boys, but grew up in a single parent house with a great mom….but no dad there.I lived in Hawaii, and he was on a different island, didnt pay child support, ect….just not a presense in my childhood…..i still cant remember what day fathers day is to this day. But its all good, I look at it this way though…….it makes me appreciate being a dad, knowing the experiences my boys are getting🤙

Steve Ackley ·  My favorite thing about being a dad to my 4-yr old is finally getting the opportunity to be his tee ball coach. Baseball is something we both love.
Christopher Dilloway ·  My favorite thing about being a dad is seeing my kids grow and learn and become their own person. They can read and they use their imaginations and they ask interesting questions that sometimes I have to come up with quick answers. I love that they like science things and geeky things, like they know all the planets in the solar system and at least a dozen superheroes and villains, and I have been able to share my love for things like Transformers and Batman with them. they both are their own person with their own ideas and thoughts, but they both are part of me.