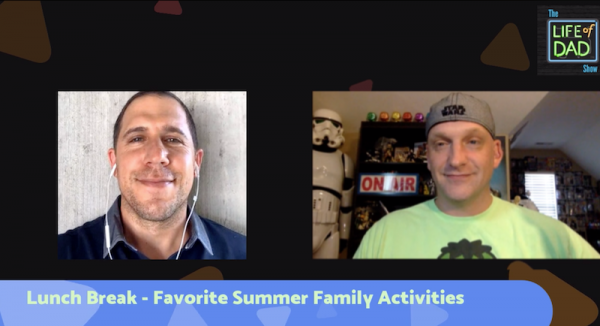 What are your favorite summer activities with your family?

The Lunch Break hosts, Art Eddy and Jon Finkel talk about their top activities and also the ones that they are not really that fond of doing during the summer.

Brock Lusch ·  My family loves to go camping. We stay in a tent and bring our Teton Sports camping gear/equipment and cook over a fire. Cask iron skillet cooking is the best!!

Jaime Osborne · We camp inside! 😂 we also like to go picking fruit (ourselves) at local farms. Then my girls like to help me make and can jellies. Summer reading programs at the local libraries.

Shawn Kingbird · The STATE FAIR! Hands down something to look forward to. If you’re a Foody. This is the place to be.

Gary Bowman · Camping at the lake. Something that brings us together, no tv, no net, dad mom, kids, and nature. Resetting the internal clock and strengthening the family bond.

Adam Fortino ·  Fishing so far, the 5 month old thinks the fish are hilarious! Out here listening from Mid-California

About The Lunch Break Hosts