Lunch Break – What Hobbies Did Your Kids Get You Into? 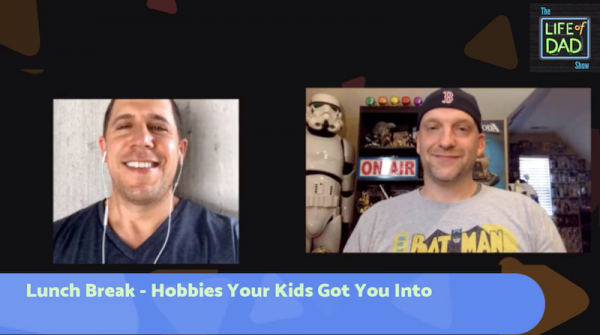 What Hobbies Did Your Kids Get You Into?

What are some hobbies and interests that your kids got you into? The Lunch Break hosts, Art Eddy and Jon Finkel share their stories on today’s show.

What some members of our audience said:

Ryan Darcy · Flags. Oldest loves flags so every day in his lunch I draw a flag and some fun facts on a Post-It.

Mick Fly ·  They have me in the hobby of picking dry Play-doh out of my shoes.

Jason Rubenalt · Making slime and riding bikes! Those are two of my favorite things to do with my daughter!
Stephen Wayne Hull ·  Wii – I asked about an X Box and they said Dad. Just stick with Wii. The X Box is too complicated for you. 😁

Thanks to WOW! Stuff for the Invisibility Cloak. This was today’s prize on this week’s Lunch Break Show.

The famous Harry Potter Invisibility Cloak  is now made possible by Wow! Stuff. The same cloak that made Harry invisible in the movies and books is something that your family can enjoy even more magic.tech from Wow! Stuff using the Chroma Key technology special effects. When the patterned side of the Invisibility cloak is facing the camera it will be visible on screen. However, when you flip your cloak inside out, so that the green lining is facing the camera, whatever or whoever is hidden beneath the cloak will magically disappear on screen!