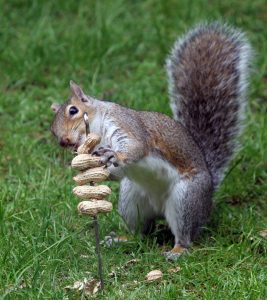 I was opening the lid on my garbage can the other night when an usually large and athletic squirrel (think Mary Lou Retton), vaulted up and over my shoulder, and out onto the lawn landing a good 15 feet behind me. I still don’t know which was more surprising, having a feral animal use my chest as a launching pad, or that it accomplish this feat with a spare rib in each of its claws. I know, crazy, right? But it gets weirder. Just before the squirrel vanished into the night, it popped up on its hind legs, glared at me with its soulless, squirrel eyes and let out a series of obscenities that would have made Bobby Knight blush. Now, I do not actually speak squirrel, but judging from the length and volume of its diatribe, it was pretty clear he wasn’t thanking me for dinner. So, head spinning, my heart rate somewhere between zero and explode, I did what most of us would do. I piled a bunch of bricks on top of the lid, and headed inside for a nice cup of Xanax.

The next morning I woke up to find the front yard transformed into a post-Lollapalooza trashscape, but even more disconcerting was that the can was exactly as I’d left it the night before, bricks and all. This obviously raised a number of questions. For instance, could a squirrel move a pile of bricks? Possibly a really big one, but no way it could have put them back. Could an alliance of woodland creatures been formed to accomplish the task? Perhaps. You know I once saw a raccoon open a car door and steal a stereo (not true).

I even considered the neighbor kid, though this seemed more farfetched than my critter cabal theory as he’s only a toddler. So from my front window, it was definitely a big mystery, but upon closer inspection I quickly uncovered the bizarre truth. The squirrel had chewed a four-inch hole in the garbage can, draining its contents from the bottom not unlike shot gunning a beer. And yes it bothered me that I’d been out smarted by a squirrel, but this squirrel was clearly of the super intelligent mutant variety, undoubtedly an escapee from one of the many pharmaceutical labs in the area. I had to admit though, I felt a bit of admiration for the shear will, determination, and gastric consequences this animal endured to feed its family. In Fact, it actually made me wonder how far I would be willing to go to feed my family. And for a brief moment I felt empathy. Then I called my brother-in-law and asked to borrow his pellet gun.