THE FOLLOWING IS BASED ON A TRUE STORY

The father looked his daughter clear in the eyes. No blinking. No hesitation. He, 39 years old; she, all of 6 and one-quarter-months if you asked her directly. He, with his near-four decades of training-wheels free, bike riding experience; she, with nothing but gumption and giddiness to guide her decision.

“I know you’re ready to do this,” the dad said. “But once you take these training wheels off we’re never putting them on again. There’s no looking back. Do you want to take them off?”

And so the dad pulled his trusty Craftsmen 12” Adjustable Wrench out of his toolbox and removed the training wheels one by one. The Disney Frozen-themed bike looked naked without them. The wheels also looked bigger, like a teenager’s front teeth after their braces come off.

She picked the bike up and stood next to it.

“I’m going to get a water because I’ll be thirsty from learning how to ride,” she said, moving to the refrigerator in the garage. When she let go of the bike, it crashed on its side.

“What happened?” she asked.

“No more training wheels,” the dad said. “I, uh, didn’t think about that. I’ll have to attach a kickstand later.”

“So will it crash if I’m on it?” the girl asked, suddenly apprehensive.

“Welllll,” the dad said. “Yes. But you’ll only crash a few times and I’ll be there to catch you.”

“Ohhhh,” she said, grabbing a water bottle as her confidence tumbled to the floor. “I don’t want to crash. Can we do this next weekend?”

“It’s an expression,” the dad said. “Sorry… Just… I know you can do this if you try your hardest.”

The dad threw the bike in the back of the SUV, nudged his daughter in the back seat and headed for the empty, car-free middle school parking lot down the road. Neither the father nor the daughter knew what lay ahead. Well, the dad did. Tears. Lots of them. But maybe, just maybe at the end… Success.

The young girl sits on her bike, apparently frozen, which the dad notes with irony as the bike itself has Frozen characters on it. He stands behind her, balancing the bike with his hand on the seat. He’s repeating ‘serenity now’ in his head over and over.

“What do you mean?” the dad says. “Same as you did with the training wheels on. I’m gonna push and you start pedaling and that’s it. Very easy.”

The dad pushes her and they start moving. Her feet are on the pedals, but she’s not pedaling. At all.

He continues to push her in a hunched over, lower-back-punishing half-jog, half-walk that he knows he’ll pay for tomorrow. And the next day.

“Sweetheart, if you pedal I promise your chances of riding your bike increase by a factor of ten,” he says.

He stops the bike, takes his hat off, wipes his forehead and puts it on. She looks up at him from under her big, blue, sparkly kids bike helmet. He can see it already. She wants to quit.

“We’re doing this,” he says, pre-empting any discussion. “Let’s go.”

He pushes her again and this time she pedals.

“Why!?” she says, peddling, wobbling, struggling.

She turns her head to see that the dad is jogging six feet behind her. He already let go. In an instant she spins her wheel to the right, gets her knee trapped under the handle bar and eats pavement. The dad runs over to her. She has a slightly skinned knee. No blood. No damage. No harm. No foul.

“You let go!” she cries, sniffling.

“I said I would,” the dad says. “That’s how you learn. But guess what? You biked for about twenty feet by yourself! That was awesome! You just panicked. Let’s go again.”

“Really?” the dad says. “When we go for a family bike ride what are you gonna do? Or if your friends come over and want to ride bikes you’re just gonna stay inside?”

“Nope,” the dad says. “You don’t quit because something is too hard or you aren’t good at it right away. You need to work at it, master it and conquer it. It’s like the great Doc Brown said, ‘If you put your mind to it, you can accomplish anything.’”

“I can’t,” she says, plopping down on a parking lot curb.

“You can. I know you can. I promise. Just get on the bike and let’s try again,” the dad says.

“Then I guess we’re sleeping here,” the dad says.

He walks over to the edge of the parking lot, lies down and puts his sweaty hat over his eyes, using the curb as a pillow. The girl whimpers. Five minutes pass. Then ten. It’s like the first therapy scene in Good Will Hunting between Matt Damon and Robin Williams. The dad knows he has to win this chicken fight. She has to get back on the bike by her own free will, not because he’s making her. He believes in her. He believes she’ll overcome her fear and walk over to the bike… Or… He’ll sleep on the pavement overnight and it will suck. 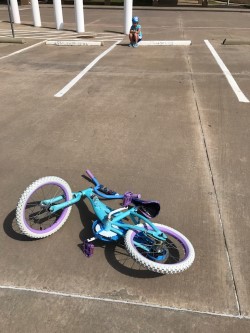 Maybe fifteen minutes passed. Maybe twenty. Maybe a half hour. The dad may or may not have dozed off, but at some point, he hears movement towards the bike. When he picks his head up, there she is, standing over it. He looks at her. She looks at him. No words are spoken. It’s time.

He gets up and walks to the bike. He clicks her helmet on. She slides on the seat.

“Don’t think about anything but the bike,” the dad says.“One push. One pedal. One ride at a time. Repeat that. Nothing else.”

“Nice and easy,” the dad says, nudging her forward. “One push. One pedal. One ride at a time. Got it?”

He’s fifteen feet behind her. Then twenty. Then thirty.

The dad jogs after her for another fifty feet and then stops to watch. His little girl can ride a bike without training wheels. She put her mind to it and she did it. Doc Brown is never wrong. 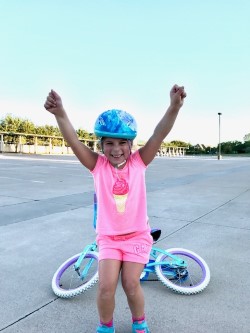 The Dad’s back has hurt like hell for three days… But it was worth it.